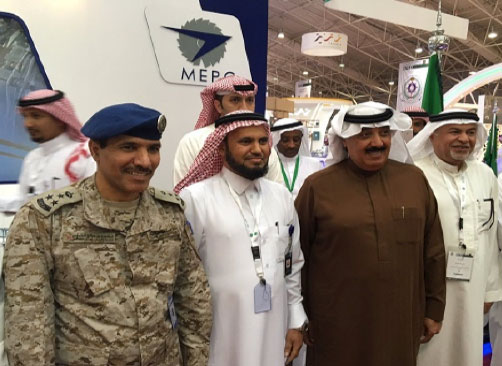 MEPC participated in the Armed Forces Exhibition for Diversification (AFED) that took place in Riyadh international Convention Center from Feb. 22 to 28.2016.
During the event HRH Mutaib Bin Abdullah Bin Abdulaziz, Brig. Gen. Attiya bin Saleh Al-Malki, and many high ranking Military officers visited the MEPC Stand.
The event was staged to support the government strategy to localize industrial support for the defense industry, diversify the economy, and reduce the reliance on international companies who are currently monopolizing the business sector. MEPC is looking forward to expanding its support to the national defense industry by extensively developing further its Military MRO services whilst continuing to offer world-class service both in quality and efficiency.
MEPC received T56 AMOF Certificate

As The first company in the Middle East and North Africa, MEPC gets (AMOF) by Rolls-Royce, For (T-56) Engines

MEPC has proudly received a qualification certificate an Authorized Maintenance and Overhaul Facility (AMOF) for the (T56) Engines by the manufacturer (Rolls Royce). MEPC is the only AMOF in the Kingdom, and the first in the (Middle East and North Africa region).

The certificate was delivered to MEPC at its headquarter’s at King Khalid International Airport-Industrial Zone in a ceremony with the presence of Mr. Paul Raowson – Managing Director Saudi Arabia Limited (Rolls Royce), Mr. Ibrahim Al-Harthi – Customer Business Middle East (Rolls Royce) and Mr. Abdullah Al-Omari – The Chief Executive Officer (MEPC).
It is worth mentioning that MEPC is one of the Economic Offset Program that was established in 1992.

MEPC is seeking in the coming years to further develop and enhance its capabilities to include all military engines and targeting both the Saudi market and Gulf States. MEPC has also embarked upon a number of high level discussions with OEM’s with the possibility of undertaking the manufacturing of components and parts for engines within Kingdom.
Engine Overhaul Repair Capabilities Expansion Contract Signing